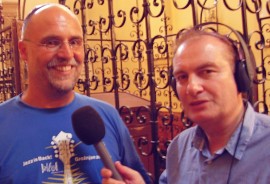 “Kristine is a producer of immense talent and integrity with a gift to see and bring out the deeper psychological and spiritual dimensions of every story.

"She has produced some of my most memorable programmes."

Do you want to enhance your company website with a professionally-produced audio interview or podcast?

Would you like your personal recollections recorded in a professionally-conducted interview for family and friends?

Do you want to portray your church or religious organisation online through a sensitively-produced audio slide show?

Contact me to discuss these or any other audio production needs.

In my 20-year BBC career, I produced a broad range of high-quality network radio programmes, from documentaries via news and current affairs to discussions, in-depth interviews, talks, and worship.

I now work part-time as Head of Radio for CTVC, an independent production company that makes programmes for the BBC and other outlets. I also edit CTVC's own regular podcast, Things Unseen.

I have won seven awards for my documentaries, most recently a Jerusalem Award in October 2016 for an interview on mental health and faith with Katharine Welby-Roberts, the Archbishop of Canterbury's daughter; and the inaugural Interview of the Year award at the Sandford St Martin Awards in June 2016 for our Good Friday programme with Diane Foley, whose son Jim was publicly beheaded by Islamic State.  Several more of my programmes were shortlisted for the Sandford St Martin Awards and the Jerusalem Awards in 2014, 2015 and 2016.

Listen to some of my programmes here.